The Macallan single malt scotch whisky wanted to create top-of-mind consciousness for their brand and drive consumers to think about The Macallan’s place in any holiday situation, from gifting to entertaining. LFO’ was tasked with creating a social campaign that would engage brand enthusiasts, connect with prospective drinkers, and ultimately drive incremental sales during the peak holiday period.

LFO’ created The Macallan Holiday Handbook, a digital anthology filled with tips, toasts, and recipes to help guys navigate the holiday season with enviable sophistication and style. We used Tumblr.com as the platform and leveraged relevant content from luxury lifestyle experts such as GQ, Esquire, and Food + Wine to broaden the subject matter beyond just scotch. Alleviating the pressure of posting on social channels that require a constant flow of conversation and sharable content to be successful, we focused on curating compelling articles and designing clever infographics and custom memes to demonstrate how The Macallan helps make the holidays spectacular.

In just three weeks, the Holiday Handbook had a massive impact! The individual memes were shared organically through a host of social channels including multiple blogs, tumblrs, tweets, and Facebook posts. The Handbook and its memes contributed to a social reach of over a half million users in the 22 days the content was live. Reblogs were commonplace, especially when the Handbook became a feature on Tumblr. Engagement was high, with an average of almost two-and-a-half minutes spent with the Handbook per user, and our responsive design enabled the nearly 40% of those users on mobile devices to view and interact with the content. 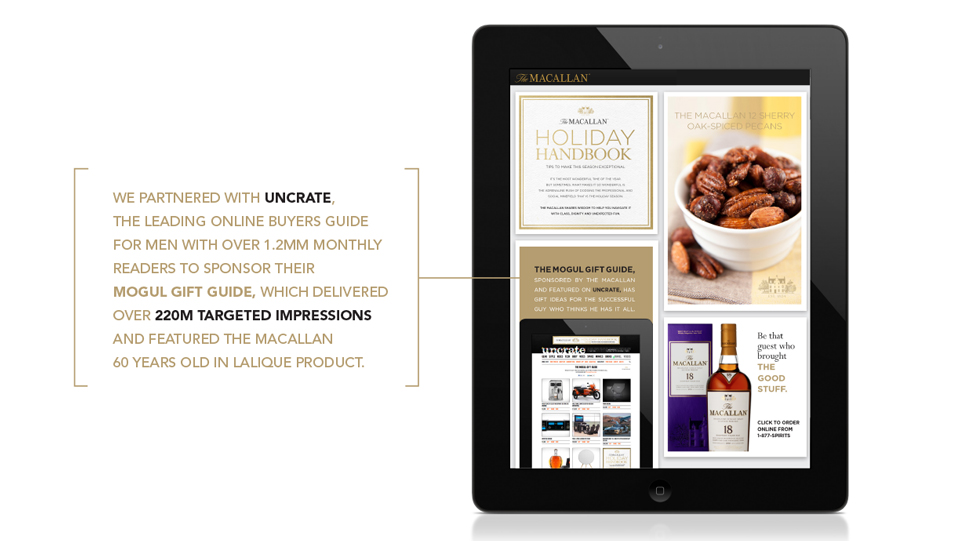